What to do at a weekend in Margate


In the past, Margate was a hard-working port that formed one of the Cinque Ports with Dover, Hastings Hythe and Rye. This came to an end in the 1800s, and the seaport turned its attention to tourism. It took a lot of visitors from London dock and factory workers on a day away from work. It benefited from excellent railway links and is still a must-see sight on the Country’s South coast.

Some of the Things to do in Margate are as follows. First on the list has to be the Dreamland Amusement Park. It is based on a traditional British amusement park. It is one of the oldest in the UK, having first opened its doors in 1880. The rides and attractions have been updated considerably since then. If you’re a fan of Only Fools and Horses, it was featured in the episode “The Jolly Boys outing”. One of its highlights is the scenic railway which was first introduced in 1920. It is currently a listed heritage site. 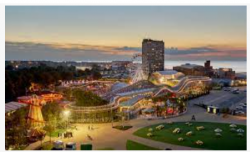 The beach at Margate is a long sweeping affair with plenty of room for the many visitors that flock to its charms. You can watch the world walk or sail by, and you might even catch sight of a sizeable ship passing through the English Channel. The Margate Museum in the town highlights the ports important maritime past, plus there is the grade one listed Shell Grotto. This is a house that has hundreds of intricately placed seashells on its walls and ceilings. No one knows who was responsible or why they did it.  Try https://www.localthingstodo.co.uk/locations/things-to-do-in-margate/ for even more.