When times were tough in making clothes

“This is the valley where Cotton is King”, sang the Folk singer and comedian Mike Harding. He was referring to a time in the North when the Mills were working day and night to produce garments and bedding out of the rough substance and material that we know as cotton. We still use cotton today for the production of Calvin Klein Menswear from EJ Menswear for example but, thankfully, it is not like how it once was. 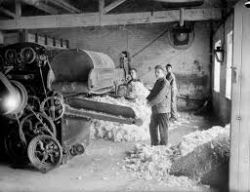 In Britain, The Mill was a sign of a revolution. The Empire and the riches it brought about by colonisation and the invention of the steam engine were maximised by pushing entrepreneurs. As the job pushed them from the land to the urban growing cities such as Manchester and Salford and the Mills and factories there that awaited them, the world of semi-skilled mass rural farm workers living in a village or small market town was increasingly changing. With working still machinery, Quarry Bank Mill remains one such example.

It is very difficult for us to understand what life for these workers would have been like. In the regions, they were low paid, and the wages that the Mills paid were far higher. In most cases, though, the owners found the mere fact that they provided them with work and a meagre wage to be sufficient reward for their labour. It quickly became clear that the male demographic would not be adequate to power the system, and women were soon hired, though on lower wages, and then kids as young as 5, on basically non-existent pay. Your adult working life started at age 5 years old. There was no pension, there were no rights to work, and you were not paid if you were ill and faced being fired.