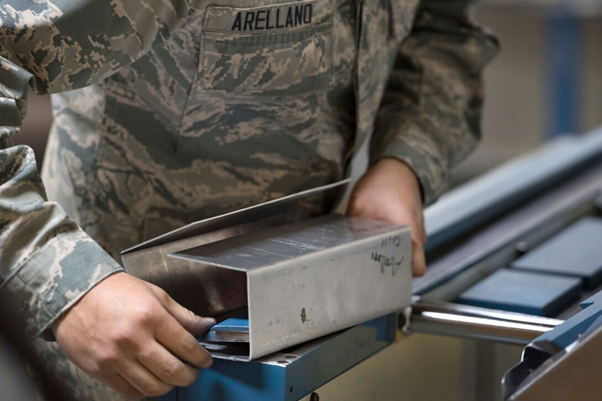 Bending is a common method of sheet metal fabrication. These methods enable metal to be transformed from flat sheets into products – particularly those with an angular shape.

Bending essentially forces the metal into a permanent new shape. The force applied to the material must be greater than the yield strength of the material. Each operation requires a different amount of tonnage. Thicker materials require more force whilst lighter ones such as aluminium need less.

So what are the most common bending methods?

There are a number of different bending methods available – each have their own advantages and disadvantages. The main ones are:

V-bending is the most commonly used bending method and uses a V-shaped punch and die. Punch and die is a versatile and flexible option when it comes to tools. There are three subgroups of V-bending: bottoming, coining, and air bending. Air bending and bottoming are the most common and account for around 9 out of 10 of all bending jobs.

U-bending is very similar to V-bending, but the die and punch are both U-shaped. This is a simple way of bending things such as steel U-channels.

Step bending is basically repetitive V-bending. Using several V-bends in succession gives a large radius for the workpiece. The more steps, the smoother the outcome. This method is used for conical hoppers and snowploughs, amongst other things. It is also a fairly cheap bending method.

Roll bending is often used for making cones or tubes. Depending on the capacity of the bending machine and the number of rolls, more than one bend can be done simultaneously.

Wipe bending (also referred to as edge bending), is another way of bending sheet metal edges. The sheet is pushed with force onto the wipe die which also defines the bend’s inner radius.